last evening, a little after 9, there was a knock on the door. i opened it and there was a man in full bee-protective clothing, saying he was here with our bees! i practically jumped up and down for joy. there's something so exciting about this bee adventure, i can't really describe why it makes me feel as joyful as it does. that these little buzzing creatures can transform pollen into the golden elixir that is honey and do so in perfectly mathematical wax combs that they build themselves is somehow magical. and it makes me unaccountably happy to think that we will be experiencing it firsthand. 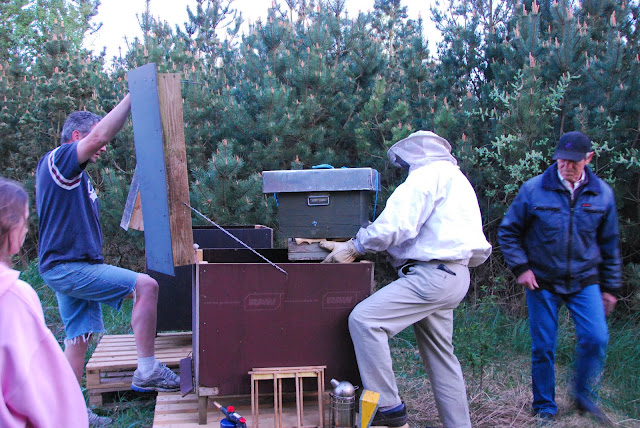 we placed our bee "stalls" as they're call in danish out in the shelterbelt, facing east, to catch the first rays of the sun as it comes over the horizon. our bee mentor (that's him in the bee garb) told us to do that and we've spent several days observing precisely when the sun is best and moving and placing the bee houses so that they'd be ready when our bees arrived. he said if the sun warms the hive, it gets the bees up and out collecting nectar up to two hours earlier than hives that don't face east! 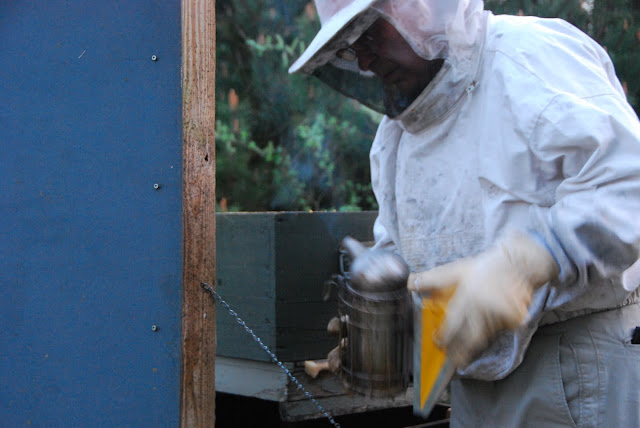 our bee mentor handled the whole thing, transferring the frames from their carrier into their new home. he has a hand smoker so calm the bees (i wonder who ever discovered that, as i would think smoke would make them angry). he said they were a little agitated by the car ride - we joked that they get car sick, but there probably is some truth to it. 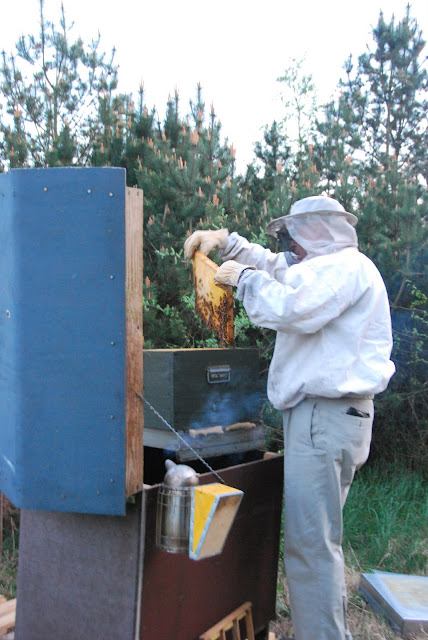 these photos aren't great, as it was really getting dark - my camera at 3200ISO looks deceptively light, but night was definitely falling fast, so that's why these were a bit blurry. there was no time for a tripod (not that i've had been likely to use one anyway). but i couldn't resist sharing them with you anyway! 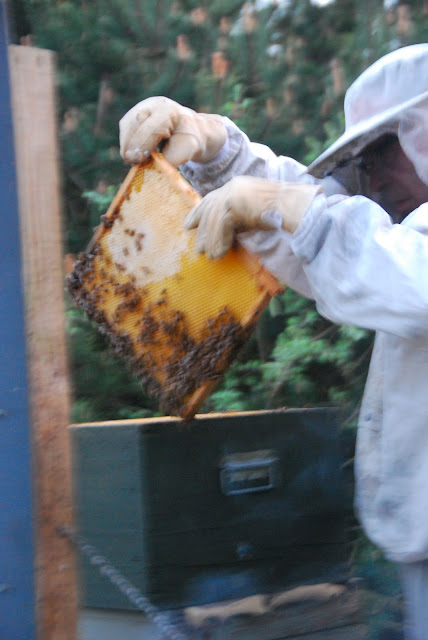 we got one bee family of around 1000 bees for each of our two bee "stalls." our bee mentor said it's also best to move them in the evening, when they're all back in their box, so you get most of them along, which was why he dropped by so late.

we're already excited about taking out the drone frame in a week and putting in a new one. he also said they really had a good start on the honey, so we'll have to set new honey frames in as well! i'll definitely be sharing more as we learn how to do all of this!  (we're still not entirely clear as to which frame is which and we kinda wonder how the bees know.) i think husband is going to be our official bee handler in our family, but i'm looking forward to the part with the honey!

Email ThisBlogThis!Share to TwitterShare to FacebookShare to Pinterest
Labels: beekeeping, self sufficiency

What an adventure! I look forward to reading more about it all.

This is something I'd like to do too, someday down the road. Can't wait to hear about your honey adventures.

I gave serious consideration to bees two years ago. In the end, I decided not to do it. It is costly, I already have too much on my hands and I realized I would likely fail at it as a result. I would like to be able to have bees though. Just as I would like chickens, but lack of enthusiasm from Mark and my greyhound's appetite for bird means I won't.

Congratulations on the start of a new adventure!!!!

I love this! I asked my husband what he thought about me keeping bees and he didn't seem super excited about the idea. But I might have to give it shot someday. :)