i've been going through some old photos in my big iPhoto library and i came across these from the viking festival at the viking ship museum in roskilde a couple of years ago. it was late summer, the sun was shining, and with snow on the ground at last, i'm feeling a bit wistful for those light, bright days. 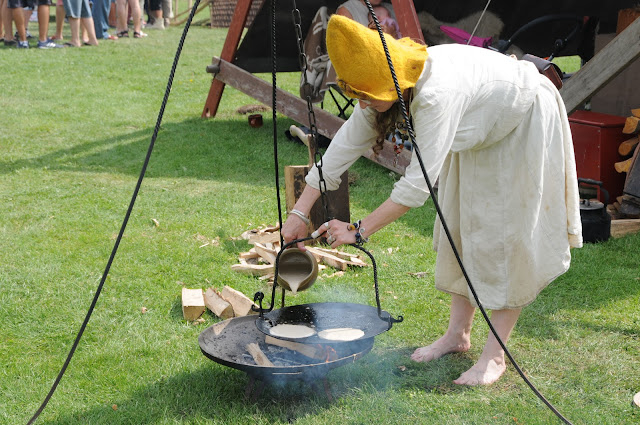 this coming summer, i want a setup like this...a place to make pancakes over the fire in the garden. tho' i think i'll stick with my normal clothes. 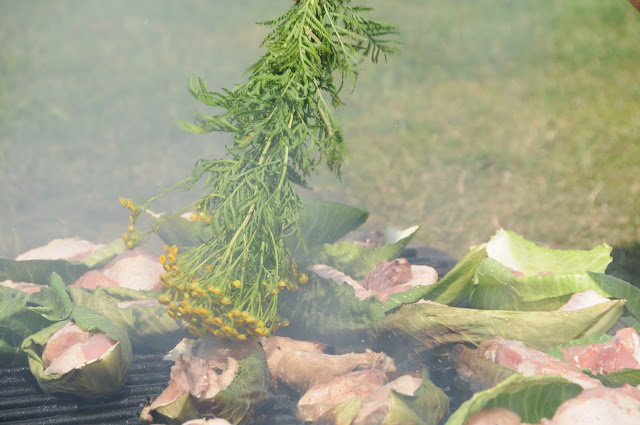 to grill delicious food, using local produce and maybe even a plant or two found in the forest. 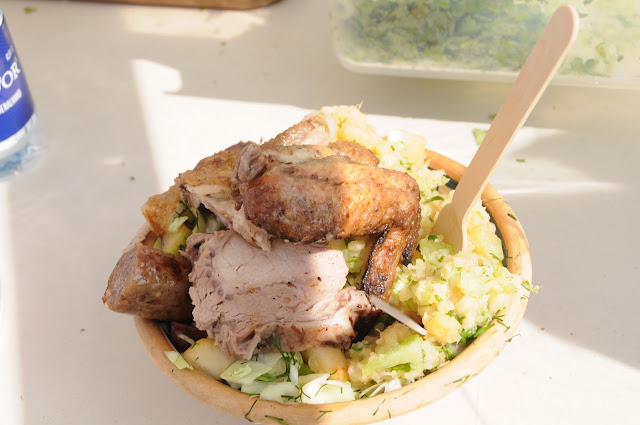 grilled meats, served up viking style in a rustic bowl on a bed of mashed root veg and grain. 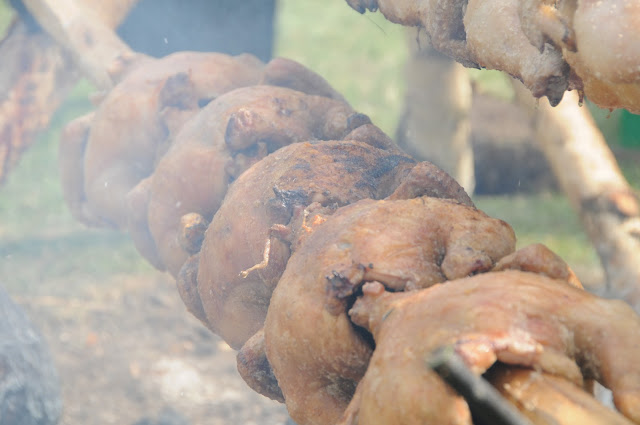 maybe not quite so many chickens at once, but a chicken grilled outdoors would be awesome. 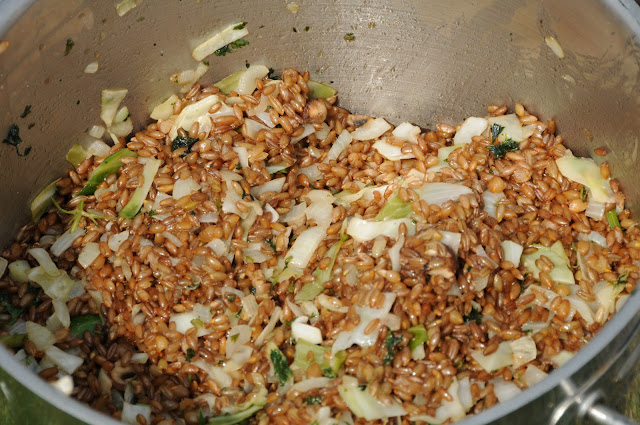 and a big bowl of heritage grains with cabbage and herbs.

summer dreams. and really, it's not THAT far away.
Posted by julochka at 1:05 PM 1 comment:

dreaming of an herbarium 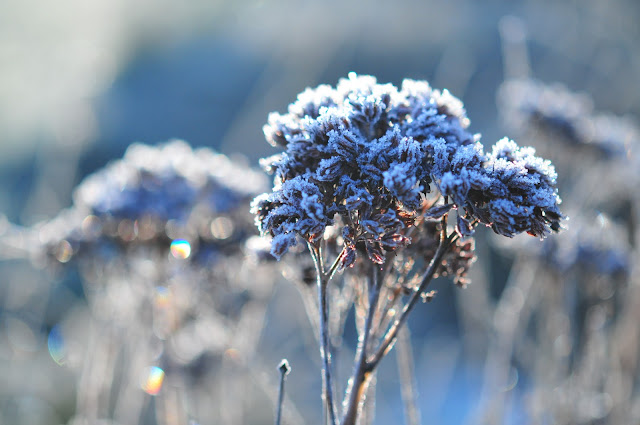 at judith's recommendation, i've been reading ellis peters' cadfael novels. they're set in 12th century england and the main character is brother cadfael, a monk who came to the cloth late in life after having been to the crusades. he solves murders and other mysteries and is an appealing character who is a bit of a rebel but no one ever really catches him at it. but most fascinating about him is that he uses all kinds of natural herbs and plants for healing. and he has a wonderful little herbarium in the abbey gardens. he uses it as a refuge and of course, a place to keep his stores and make his tinctures and medicines. i think i read the books as much for the descriptions of this magical place as anything else.

i told husband yesterday that i want an herbarium of my own in the garden. and you know with husband, it's never that far between talk and action and his eyes lit up at the idea. he was soon mumbling to himself about roofing materials and how much ventilation the building would require to keep the herbs dry.

the steps i can take towards this magical herbarium already now are lists of herbs to plant in my expanded herb garden. i've got the usual suspects, like parsley, 3 kinds of thyme, rosemary, sage, tarragon, coriander, oregano, lavender and marjoram. there's quite a lot of wild chamomile around the garden as well.  but i want to add some flowers - like echinacea. and i have a whole lot to learn, as i figure out what else to plant - both edible and medicinal.

so with learning in mind, i went looking for herb-related resources and found henriette's herbal homepage, which seems to be an absolute wealth of information. last year, i bought the amusingly-titled grow your own drugs, but will admit that i didn't do that much with it.

i love the notion of using less medicine and more natural remedies. i love the idea that some of it could be foraged. i've also found a great foraging resource in the first ways blog, which i also follow on facebook. (i'm increasingly finding facebook useful and not only social, are you?).

i can't wait for spring to come in earnest so i can get planting!

i'd love any suggestions you may have of useful sites or suggestions for what i should plant! please share!!
Posted by julochka at 1:12 PM 4 comments: 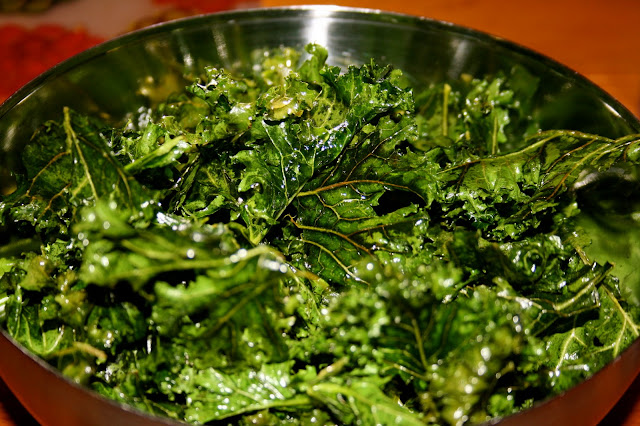 I'm not sure about all of you, but here in the Great Lakes area of the U.S. it has been a crazy early winter.  Well, more like spring.  Today was 50 degrees!  We have had a trace of snow all season, and it has been all around lovely.  We'll just have to see what that means for our real spring later on, it may be snow covered!

Anyway, a garden thingy that we've learned this season, push your cold weather greens!  Our Lettuce's, Spinach, Kale, Bok Choi, and Swiss Chard have had ups and keep coming back with this crazy barely freeze, thaw into spring weather.  A couple of times we figured, this is it.  It looks limp and sad once it thaws, then the weather stabilizes and it just perks back up and keeps going.

Before this glorious 50 degree day we had a couple of days where we were at 10 degrees, so B went out and harvested all of the remaining Kale...it won't come back from that kind of cold.  Tonight he made Kale Crisps......a MUST try if you haven't done them, they are fantastic and the kids love them!  Stressed Kale equals something akin to the sweetness of a carrot, yet green lush crispiness and with a sprinkle of sea salt.  Ahhhh

Moral of the story: experiment, stress your cold weather veg and enjoy!

Wash, De-stem and chop up Kale.
Toss in a little of olive oil sprinkle with salt (or whatever seasoning your heart desires)
Turn out onto a cookie sheet and bake at 275 degrees Fahrenheit  for about 15 min.

This can go from perfect to burnt in no time, so watch it, touch it and feel for crispness.  It maintains its gorgeous green color and every oven is a little different.