I feel very much like a hibernating animal just coming out of its burrow. And rejoicing that it is SPRING! I all ready have 11 varietes of seeds starting inside and another 4 to be directed sowed hopefully this weekend. But that is another post.

This post is meant to catch you up on some projects I did over this thankfully mild winter. Two of the projects were making lamps out of repurposed and salvaged materials and the other was a repurposed organizing thing-y. (Just as an aside, is there a better term than repurposed? Re-do? Recycled?)

So, the first one was a lamp we did. We made the lampshade out of a piece of wood veneer salvaged from the wood some friend's roof tiles were wrapped in. We made the base from an old pepper grinder that no longer worked. And the working bits were cannibalized from some old lights we had found at the dump. A repurposed light at all levels. And a nice hygge (cozy) atmosphere it gives. It's a bit hard to tell in the photo but the cracks actually have these fine strands between them as you can see in the shadow. 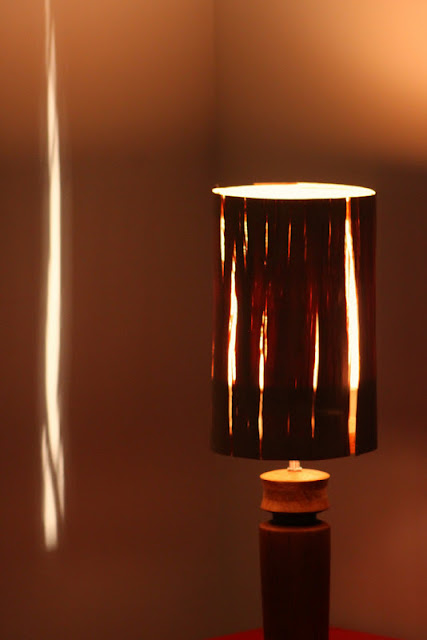 And then we also finished another lamp, this time a pendant lightshade. We've been thinking about this lamp for ages (like 18 months maybe) and have tried variations with different wood veneers, different widths, different forms etc. For this actual light, we used the salvaged wood veneer although the red cord is new. For the steaming we used the shower and hot water and various buckets to form curves. It was best to curve them while still wet so there was a lot of drilling in the bathroom. There was also a lot of  wrestling or assembling which took ages to get it into this form. Oh and then dicovering once we had a form we liked that we had to take it apart to do the sanding. Sigh. But further wrestling after the sanding and veneering did make a lightshade we really are quite happy with. 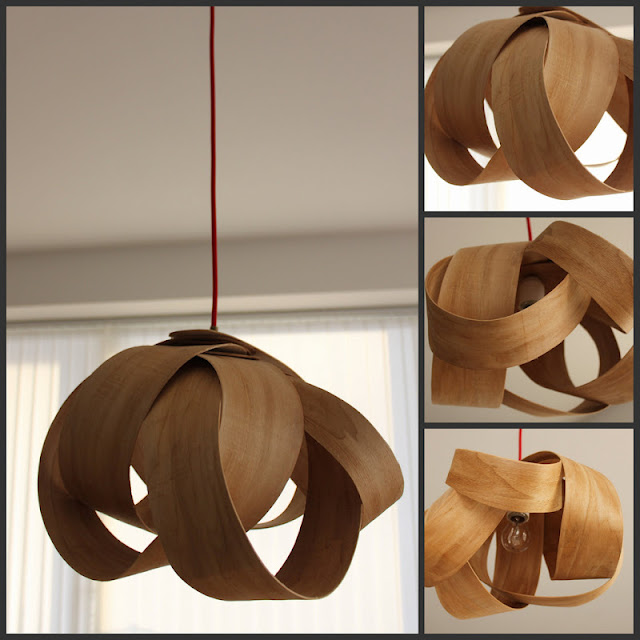 And finally, a quick little organizer. Our rag stash and plastic bag stash were housed under the sink in the utility room. Of course this meant that when putting away rather than reach under the sink and put the rag or bag into the bag, they were just thrown into the cupboard. So the cupboard was a teeming mess of rags, bags, and cleaning supplies. In a typical fit one evening, I felt it needed sorting. And here is how we sorted it: 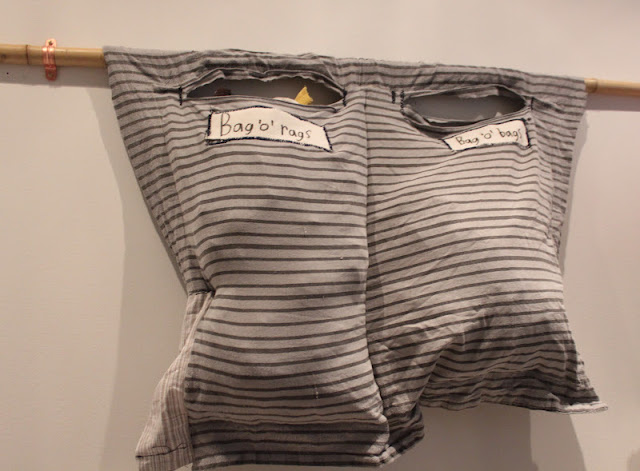 We used an old sham pillowcase (a pillow case with the opening in the middle rather than at an end) and sewed down the middle to create two sides. A little careful cutting to create a top of the bag, a little sewing on stress points, the sham (fringe) bit cut open, some cute labels sewn on, and then we mounted it on some old bamboo we had. The process of doing this did make us sort through the rag stash and since the new system provides less space than the old cupboard system, we had to decide what to keep. One thing we did was go through the old underwear which had been thrown into the cupboard and cut any good elastic off (especially the wider stuff from the men's underwear) and save it for sewing projects. (And cut and throw out the gussets but that is probably too much information!). We also cut into more manageable pieces the bigger scraps like shirts. Hopefully this will keep us a little tidier!
What were you up to this winter?
Posted by Jude at 8:23 AM 4 comments: