waiting for the apples 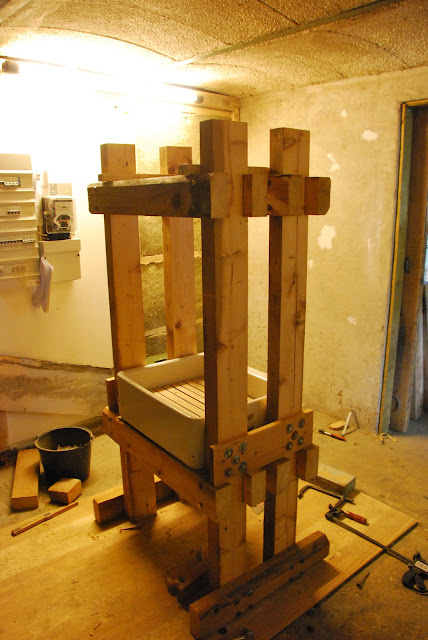 over the past week or so, husband has been hard at work building an apple cider press.  he searched online, watched a couple of youtube videos and then went to work. we've got grand plans for hard cider and regular cider production and tho' we only just planted our apple orchard this year (and 4 of the 10 trees we ordered died), husband thinks it's never too early to get started. 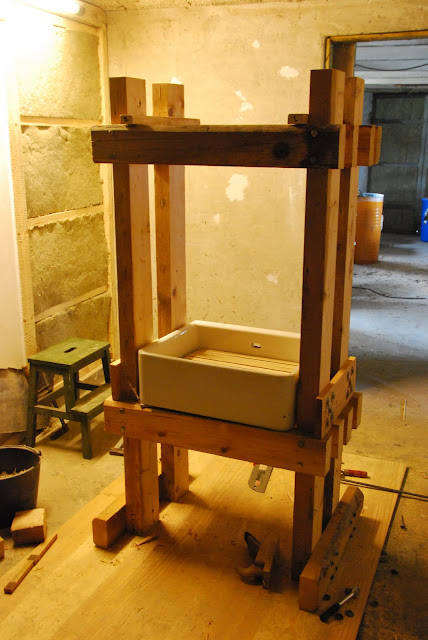 we had an old sink from the old house and he cleaned it up and repurposed it for the press. what's great is you can take advantage of the drain and drain the cider into a clean bucket as it's pressed. the construction is very sturdy, as you can see, but the jack that places the pressure on the apples (which are wrapped in lengths of clean, unbleached fabric), will put a lot of pressure on the frame. 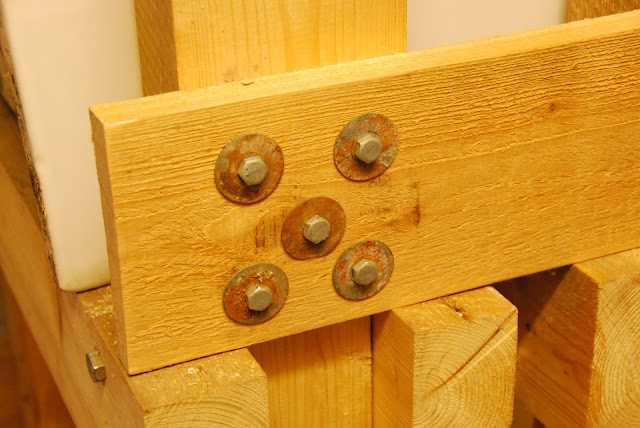 husband loves french screws (that's his name for them - in my opinion, they look like bolts), so he used plenty of those. we don't have apples that are ready yet, so i can't show you the press in use, but as soon as we do (we've arranged to get a bunch from a neighbor since our baby trees aren't producing yet), i'll be back with more pictures and more about how we're going about this. 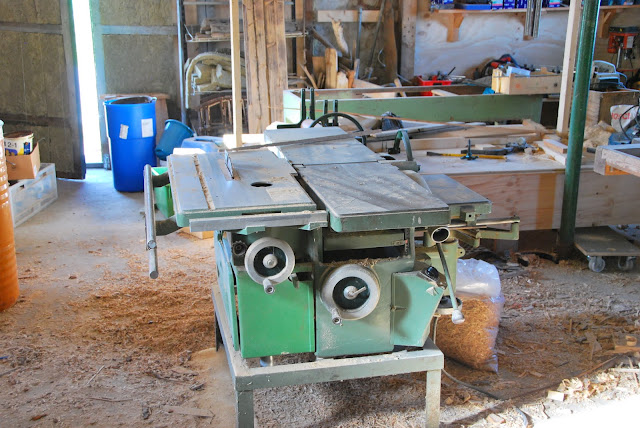 last friday, husband had a little encounter with this big, mean table saw, but it didn't stop him for long and he got to work making a little machine that will chop up the apples so that we can get more cider out of them and i won't have to stand with a big dangerous knife and chop them up, likely necessitating another trip to the emergency room. 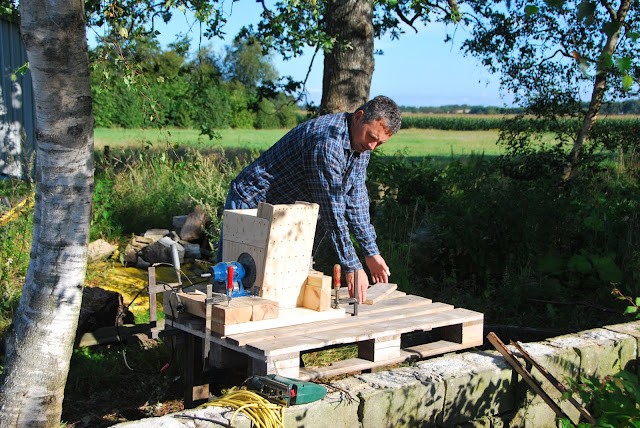 husband loves to work with wood, so he created this little chopper, repurposing an old bench grinder for the bit that does the chopping.  you can catch a little glimpse of his bandaged left thumb here. 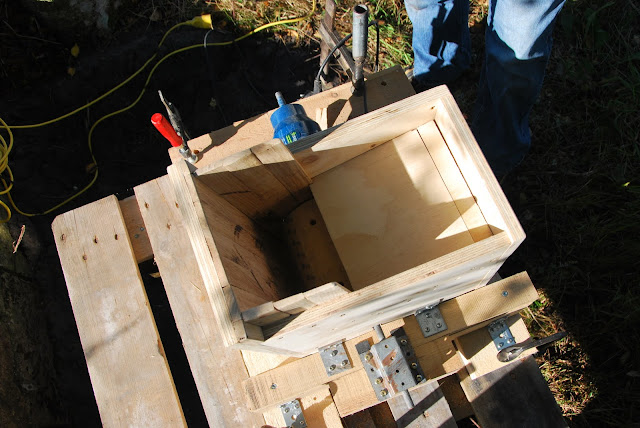 he placed screws at regular intervals on the wooden drum inside and so they chop up the apples as you feed them through. 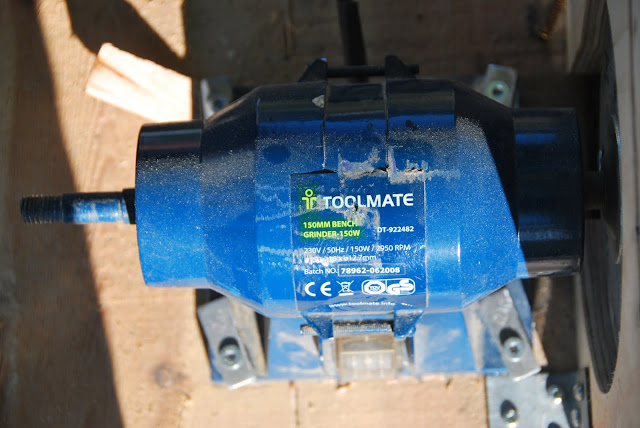 we're not sure if this little engine is actually going to prove too wussy in actual practice - we've fed a handful of apples through and it was up to the task, but we don't really know it will handle a major apple chopping job. 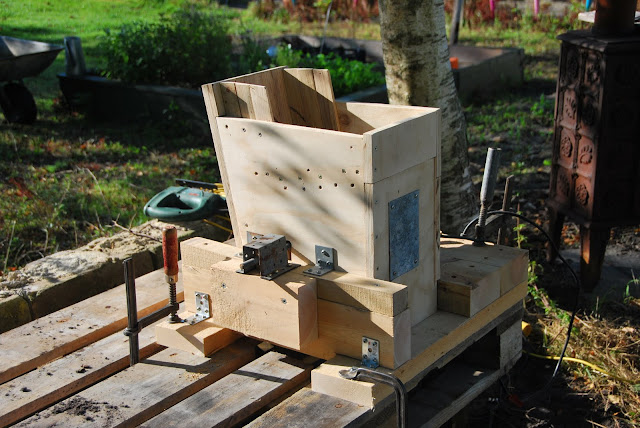 husband built a bench out of an old pallet to fix it to, as it's got quite a lot of vibration. 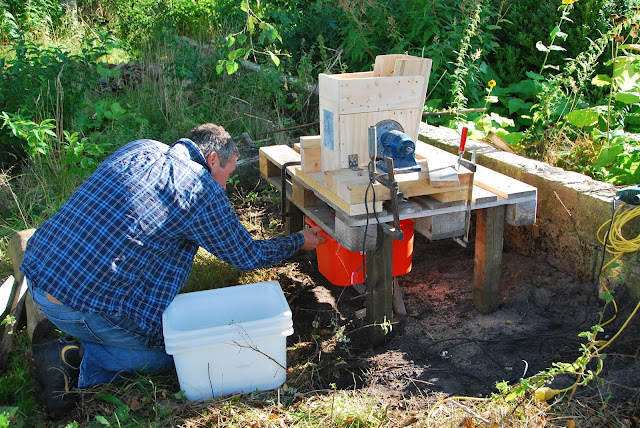 the chopped apples come out below and fall into these plastic ikea tubs. the chopped apples will be enclosed in big squares of fabric and then pressed. ultimately, we'll put the cider into those wine balloons so it can ferment into hard cider. but more about that process when we actually get to it in a few weeks.  this project has actually made me excited that autumn is in the air!

i just wanted to share this project as it goes along, mostly because of how creatively husband has repurposed items  - the sink, the car jack (not pictured) that will provide the pressure, the pallet, the old grinder. now that's what i call living sustainably!  you never know what you might be able to build with things you already have around the house! it's easier on the environment and much more economical. even if it is, at times, hard on your thumb.
Posted by julochka at 1:12 PM

how great will this be? i love fall. husband is doing such a great job at finding new purpose for other items. bravo.

um...j, your husband is awesome.

i had a plan to make some hard cider this year, too, but from store bought cider because i don't have a cider press. i'm looking forward to seeing your process. :)

I am impressed at what your husband is doing.. Would be great seeing your progress!