when you have a new place, it's always an adventure to see what's coming up around the garden, planted there by those who came before. last year, when we arrived, we saw that there were loads of strawberries. and we heard from neighbors that those who lived here before had actually sold strawberries. we weren't so interested in doing that, but we were interested in saving some of the shoots that the strawberries send out and thereby getting new (and free) strawberry plants. so last year, that was pretty much the extent of our efforts. we cleared a long row and tucked those little shoots into small plastic pots that we embedded into the sandy soil. now it's time to move all of those new little plants with their fine roots over to a new bed. and so we did that this week. 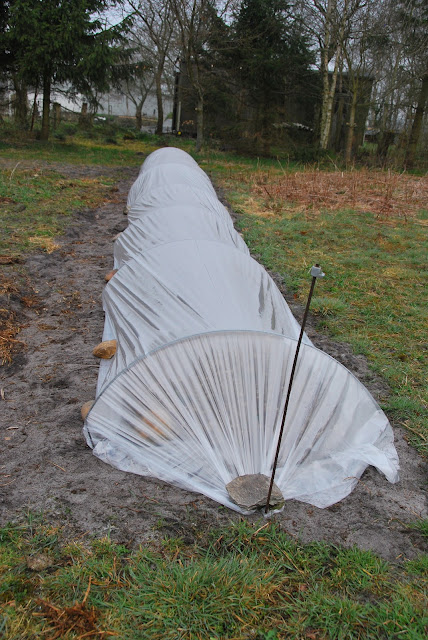 we prepared a bed, taking as many of the weed roots out as possible and turning in lots of horse poo (tho' not too much, because it is rich and can actually burn your plants). we have extremely sandy soil, which makes for great drainage, but isn't the most nutrient-rich soil, so fertilizing is important. we laid down a sheet of black fiber to try to help against the weeds (we have persistent crab grass), then cut holes in for the strawberries and moved the little plants (my hands were dirty and i failed to photograph this part). as you can see, we've stretched a plastic tunnel across it, hoping to both protect from the chilly nights that are yet to come (tho' strawberries can actually tolerate quite a lot of cold) and hoping to hurry them up a little bit - hopefully by a couple of weeks! we have another even longer bed that's not covered, so it's an experiment in seeing whether the tunnel helps and how much.

while we were at it, we decided to move some of the rhubarb that were here when we bought the place, over to a more suitable place near the other edible perennials (like asparagus).  i thought last summer when we arrived that there were 12 rhubarb plants, but it proved there were far more, especially as we we were able to separate some obviously very old roots.

seeing these old and very established roots was somehow so satisfying. i felt a little bit like i was next in a long historical line. weird, how seeing a root provoked that feeling in me. a very base and primordial feeling of being very close to the earth. wonderful.

and now there are two rows of rhubarb next to a long row of asparagus. they'll no doubt be quite relieved not to have to compete with all that grass anymore. tho' they'll probably be a bit shocked by their move, rhubarb is extremely hardy and  will undoubtedly come back very quickly.

and that's what happened in our sustainable life this week.
Posted by julochka at 7:53 PM

Oh, rhubarb and strawberries ... what a feast they will make later on this year - yummie!