we're going to beekeeping (lessons that is)!

in denmark, there's an association for most anything you'd like to do. during the darkest days of last winter, in the throes of dreams of long golden summer days, we joined the national beekeeping association. and they assigned us to a local chapter.  a few weeks ago, a very nice elderly man came to the door and welcomed me to the club. he also told me a whole lot about beekeeping - queens and drones and changing out honey-laden frames - about 65% of which i understood due to his strong local accent. but i got a very good vibe from him - he was kind and friendly and clearly loves bees.

i told the nice man that we were total beginners and would very much like to have lessons in beekeeping. i also said that if he came across anyone selling all of their bee supplies for a good price, we'd be interested. he regaled me with tales of others who had gotten their supplies for a good price and assured me he would be able to find a similar deal for us.


last evening was the first class. there were several other bee newbies, tho' they were all well past retirement age. they seemed charmed that "youngsters" like us were interested. the club has a skolebigård ("school bee farm" if i directly translate)  at a ramshackle teeny little museum in an equally tiny town that's not much else. last evening, we checked all of the hives there, to see how the bees had come through the winter. actually, we watched, as the guys who knew about it checked them. he showed us the difference between combs that were full of eggs and those that were full of honey. 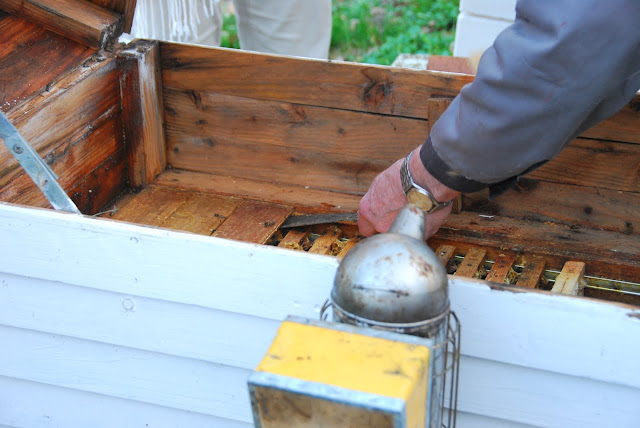 again, i got only about 65% of it, but husband was there to catch the important bits. i was mostly taking pictures and feeling that close-to-nature feeling that accompanies such activities. it was an absolutely glorious evening, the sun doesn't set 'til 9 or so these days and it was warm and beautiful. the trees were full of bird song and the bees were humming, tho' they seemed very tame. the little smoker helped, but i also think it helped that the main bee handler was as calm around them as could be. he did warn that if there was a thunderstorm, you should just pack up and go home because it made the bees very agitated.

so we're going to be getting two of these bee "stalls" just after easter. and then our own bee adventure will begin. i'll definitely keep you posted on how it's going.
Posted by julochka at 10:41 AM

Email ThisBlogThis!Share to TwitterShare to FacebookShare to Pinterest
Labels: beekeeping, learning something new, self sufficiency

So exciting! Can't wait to follow your bee adventure!!

I love bees and all things honey!

A new adventure, I just love it when I read about your new experience and the willingness just to jump in.

.... I get the willies just looking at your pictures. I do love honey and the bees as well... but they give me the gitters just the same when in large quanitities :-) Love your pics...

You are brave to be so close to that many bees ... hope you will get a lot of lovely honey from them in return!