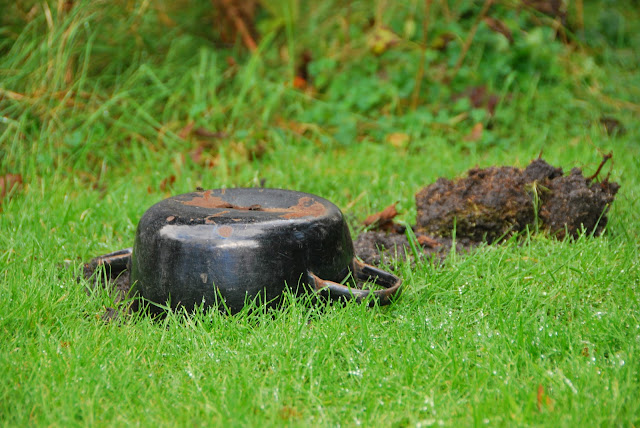 there are a lot of amusing aspects to living out in the countryside. like that the way to get 100+ straw bales is to casually mention to the neighbor that it might be nice to have some for winter. not because he has any, but because he will talk to the guy down the road, who lives across from hay jørgen, whose son will come by one evening, in a rush to deliver the straw bales, fresh from the field, just before dark and before the rain starts. and then there's also the widespread rumor (which i'm not doing anything to dispel) that i'm canadian.

but my favorite thing is, hands down, the moleman. he's a marvelous elderly gentleman with a rusty old ford escort full of mole traps and various pans, bowls and buckets. sometimes you look outside and see him wandering across the lawn, setting mole traps. he digs them in and then covers them with an old pan or bowl or bucket. he seems nearly psychic as to when moles have put in an appearance (tho' that's also obvious, of course, by the fresh dark mounds of dirt on the lawn) and he shows up and suddenly instead of mounds of dirt, you have old pans here and there on the lawn. he doesn't knock and he doesn't announce himself, tho' he will say hello if you happen to be outside.

we don't actually have his phone number, the neighborhood retired pilot originally contacted him for us. but all you need is the initial contact and you're a customer of the moleman for life. he comes by, sets traps, checks them, and notes it all on a scrap of paper in his pocket. he comes by once in awhile, shows you the tally - 30 kroner per trip he's made out here, plus 10 kroner per mole - and wants to be paid. each mole that's met its maker is carefully marked on the scrap of paper, which he's happy to show you as proof. he caught 47 moles over at our friends' house. he's probably gotten around 30 or so here in the past year.

the only bad habit he has is that he leaves the dead moles lying around. however, our barn kitties think that's just fine.

how do you get rid of moles at your house?
Posted by julochka at 6:44 PM

My mum is terrified of those round hay bales, which I find hugely amusing. She had a nightmare once that they were used in an attack by aliens! Which is partly whilst I bought the Alien Joyride stiched up! ;D

We get unwashed hair clippings from the local hairdresser and put them down the fresh moleholes. Moles hate the smell of human hair!

Oh, you're lucky to have that moleman! I'd love to have one too - but instead I've just got hundreds of moles.

Old people here say it helps to pour oil or gasoline into the holes - but I wouldn't do that. I've tried one of those battery-driven pins with ultrasound, but it didn't really help, as far as I could see.

Sometimes the neighbour cat manages to get one, but far too few.

Of course they are a nuisance, but in comparison to the naked black snails and the deers, it's peanuts!