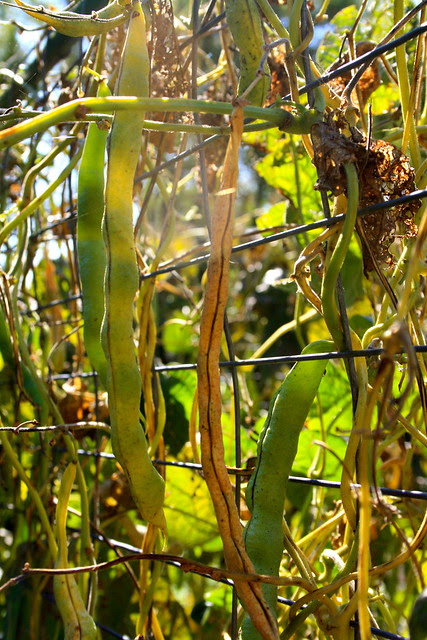 Last week I announced the end of year two's farm bags.  This year was quite a ride.  The weather was unusual, to say the least.  We were very cool until July, then began searing much warmer than normal temperatures and zero rain, it was capped off by a return to very cool temperatures just as the tomatoes should be ripening (we had our first light frost September 4!).  Despite the uncooperative weather we had a very successful season.  This is especially illustrated to me by the number of home gardeners who I talk to, that had little to no success with anything this year.

We had changed our planting volume this year to specifically accommodate the number of families that we had taken on.  Even with this pre-planning, each week when I would announce a new farm bag was ready (half of the group would pick up on say a Wednesday and the other half on a Friday), I would begin to have some anxiety.  Would I have enough so everyone could have the same volumes?  Is everyone perceiving value from their bags?  By the time delivery would take place, each bag seemed to have grown exponentially from what I had envisioned on it's announcement.  We had eight successful farm bags when I closed last week.  We do have all of our fall planting, which has been loving the cool weather, so I informed the families that later in the fall we may have one or two more bags available for those interested in greens and sweet potatoes.

What lessons from year two?  I need to focus on our own consumption and preservation.  We did fairly well, but my main concern was meeting the commitment I made to the produce families.  So when the season was less than ideal, I wanted to make sure they were accommodated.  I don't think I would change the planting strategy.  We had plenty of plants for the families.  The season dictated the yields and I feel fortunate we got the volume we did!  We had green beans coming out of our ears, which I feel quite proud of, since so many said they had none.  We have a lot of work ahead.  We won't begin fall prep/tear down until later this year because we are still nursing things along.  We began a gorgeous Indian Summer yesterday and it's set to last for another six days.  We hope to ripen enough tomatoes to get some canning done.  Whatever doesn't ripen, we are going to process all of the green tomatoes.

Will we continue on?  Absolutely.  As with anything, we need to find the balance to handle it all.  But it is the direction we are going and sometimes you need to juggle while creating a new life path and maintaining the old.  I was so inspired by The Chef's Garden from Julie's post yesterday.  I wonder if we will get there someday?

The above shot is our lazy housewife green beans drying.  These beans make amazing dried soup beans and I can't wait to shell them at the end of the season.  They will be a warm creamy winter treat!
Posted by rayfamily at 1:36 PM

i've been thinking that i need to do another post on preservation...i've done it it fits and spurts and not nearly enough...i've made lots of cordials and quite a bit of raspberry marmalade (that is heaven in a jar), but i have to admit that i let the raspberries go and i could have made much more. i should have picked another round or two of elderberries as well, but didn't manage to do it. i'm not sure why i wasn't able to stay focused on those things. i feel especially guilty about the raspberries. i think i let rainy weather keep me from picking for a few days and then they got away from me. it is hard, as you say, to juggle the new life path while you're still, to some degree, living in the old one...but it's all a process, isn't it?

I think you're doing a great job! If only I would live closer, I would certainly love to be on that bag list of yours!