Vegetable gardening is the new 'it'

Although we all ready know that growing vegetables is THE thing to do, this has now been confirmed by the gardening elite displaying at the Royal Horticultural Society's, Chelsea Flower Show. So, I thought I'd summarize three of the gardens I found interesting and relevant to us:

The B&Q (Home Depot in North America) garden was entirely vegetable based. Their garden was "designed to encourage individuals and communities to develop sustainable food growing spaces and enhance urban greening, no matter what the size of their plot." For them, this meant building a 9 metre high vertical garden! The window boxes off the tower attempted to show how vegetables can be grown anywhere. Although I am not sure how practical a 9 metre high garden is, I love the cleverness of it. One side of the tower was the garden while the other side was a potting shed that included "composting, rainwater harvesting and storage, a thermal chimney, photovoltaic panels and a wind turbine." Now, that's cool! They also had a adjacent "insect hotel" made by school children. And the judges loved it too, awarding it a Gold Medal.

Another garden featuring veggies was the M&G Garden. This one was more traditional and I think beautiful than the B&Q garden. It featured, as they say, "a modern take on a traditional kitchen garden." In the above photo, you can see the terracotta pots and the willow framed raised beds. The raised beds had 20 different vegetables and there were 6 different fruit trees (lemon, lime, apples, pear, fig and medlar). They also squeezed in 16 different herbs as well as some beautiful flowers. It was very evocative of the classic French potager garden.


And finally, the Best of the Show garden by the Daily Telegraph, featured vegetables too. Amongst the flowers were leeks, fennel, and parsnips in flower. 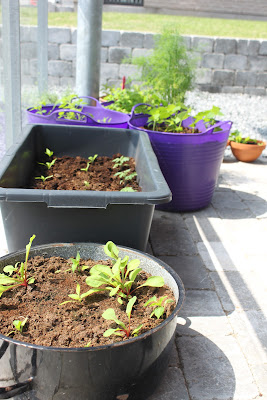 From the front, in the shorter black pot is chard and peppers, next in the black trough is tomatoes, peppers and eggplants (aubergines), behind that in three purple pots are tomatoes, bush green beans, dill, cilantro, and basil. Way in the back in the terracotta pots are spinach (in two pots) and some thyme in a third pot. Somewhere back there is also a lavender. Of all the plants, the dill is doing the best: 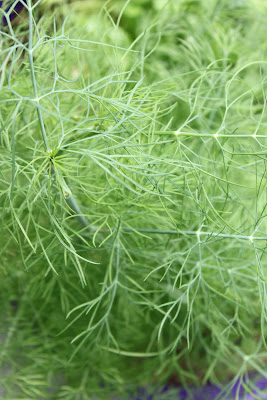 I am off today to get some more soil as I need to plant out some more eggplants and rearrange some of the beans, chard and peppers. I tend to do that sort of repotting which I know you shouldn't but I just can't help myself. I like to reposition plants. Makes me feel like I am doing something! I might post more pictures if I can make the garden look more appealling!

aha I too am a home grower - I love it. I have given up my rented allotment this year because of the time it takes and am now doing an Alys Fowler inspired Edible Garden at home. So liberating!

Reminds me of the Transition Town community. You can't get more ecological then growing your own crops. Big up!