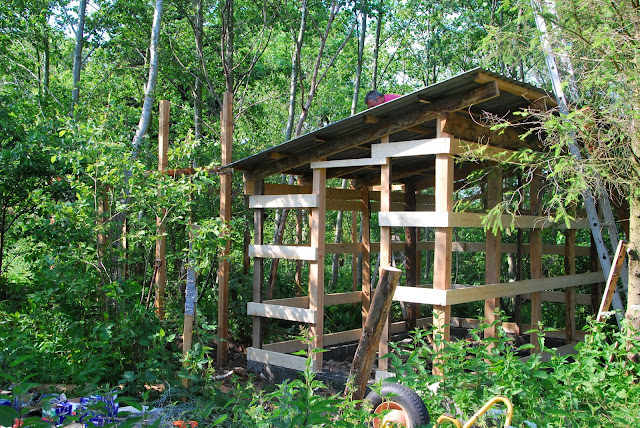 at last, progress was made on our chicken coop this weekend. it's just been a foundation for awhile, but now it's beginning to look like an actual building with a roof and everything! those poles sticking up at the back are for the fenced enclosure where they'll be able to be outside. according to danish law, you have to have even the outdoor areas completely enclosed, in case there's a bird flu scare - so you can keep your chickens separate from wild birds.  it will also undoubtedly help secure the chickens against the mama fox and her two babies that i've seen meandering in our field in the evenings. 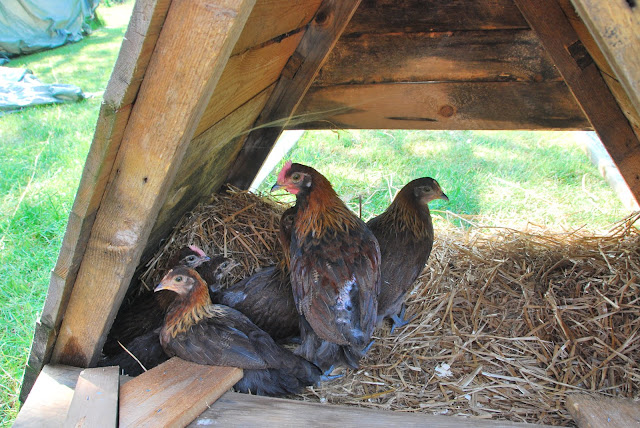 i, of course, couldn't wait to get the chickens 'til their coop was done, so i found an ad in the blå avis (our craig's list equivalent) and went off on a chicken acquisition mission. i think i was also hoping to speed up the building process on the chicken coop a bit by having the actual chickens waiting in the wings, as it were.  luckily, they can live in the outdoor bunny cage 'til their coop is finished. 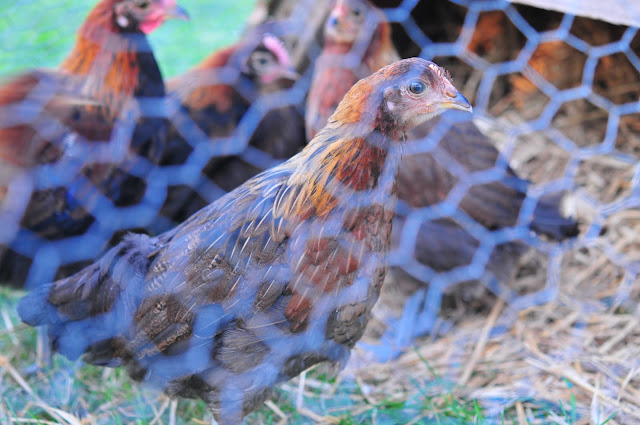 i went to the chicken farm, intending to get a 1.4 as they call it - four hens and a rooster - but while i was there, i was talked into one more hen and they threw in an extra rooster for free. there was also a possible commitment on my part to buy a very cute little pony, but thus far, we're just whispering about that.  we are going back to get some cool swedish black chickens that are a nordic heritage breed and good egg-layers - they weren't quite big enough (you couldn't tell which were boys and which were girls as of yet). the chickens we got are 2 months old and are dansk landhøns, another old nordic breed. tho' i do still want a couple of araucanas, which aren't a nordic breed (i need those martha stewart blue eggs).

the poultry farm was a marvelous place and next time i will take my camera (how i managed to get out the door without it is beyond me). they're raising all sorts of traditional nordic breeds and contributing to bringing them back to commercial viability. they also had all kinds of turkeys, guinea fowl and even some gorgeous peacocks! they were really fowl people! (sorry, i couldn't resist) i'm always so excited to meet people like that - people who are passionate about what they're doing, have loads of knowledge and enthusiasm for it and are contributing to sustainability. all of their birds had a great life, with lots of fresh air and outdoor space to run around in. they had electric fences to protect against the foxes and said they hadn't had any trouble with them.

it's funny, my high school boyfriend knew all about chickens (he'd been in "country school" 'til the 7th grade) and i remember teasing him endlessly and thinking he was a bit of a geek. and now, some thirty-odd years later, i find having chickens to be cool.
Posted by julochka at 1:48 PM

Cool! Although I am not a bird person at all, I do love these heritage breeds and people's commitment to continuing them.