Although not as beautiful or useful as the chicken feed turned into farm produce bags, I had a go at some upcycling. We needed a garbage can for the bathroom and I was reluctant to spend money on either a crazily expensive desginery one or a cheap plastic one. And I need to floss my teeth more so there really had to be one to stop the floss accumulating on the countertop waiting to be transferred to the kitchen bin. Inspired by this bin, I started folding magazine pages.I followed the instructions for the base which was simply fold magazine page into strips and wrap this around each other to make a flat base. Pretty simple although there is lots of glue involved and as it gets bigger it gets harder to keep it tightly together. I found squeezing it between my knees useful for applying pressure to make the glue stick. (And there was the added advantage of the hilarity that ensured from having sticky knees.)

I then started to make the little circles. This was tedious because it involved folding, making the circle, gluing it shut, holding it shut with a paperclip, waiting for it to dry and then trying to figure a way for it to be glued to the base and each other. Without a hot glue gun, I just couldn't see how it could be done. Too many steps. And I don't like waiting for things to dry.  So here I kind of went off roading with my crafty project.

Instead, I rolled the magazine pages up tightly (easier than folding) and stuck them into the edges of the base and secured them with more glue and the a few extra wraps of paper around the base. The I started weaving folded pages through the uprights. It took me a while to find the rhythm of it and certainly I will never again say that something that is easy is like basket-weaving. Because basket-weaving is flipping hard! Here it is at the beginning of the weaving part: 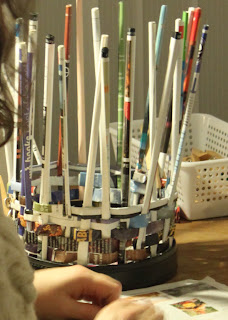 Once I had had enough, I mean once I got it to a height I liked, my husband folded down the uprights and weaved those together. And here it is: 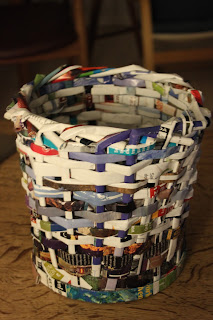 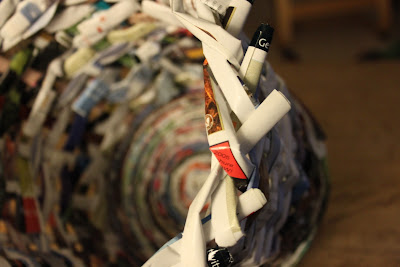 It looks great in the bathroom, it used up at least one magazine and it is recyclable itself. So now I have no excuse for not flossing.

i love it! but you really do need a hot glue gun. don't you have a panduro in sønderborg? go get one. they're not even expensive. :-)

Now we are minds alike. It so happens that last week I got a book from the library on how to weave baskets!!!! But you took action and I didn't but that I wasn't in need of one, I thought I might be fun to try.

Your basket is absolutely gorgeous, congratulations.

Jude, That is fantastic! I will have to try this..ahh maybe with the pages that I don't pull out of my Mother Earth News :)

Now that is a great idea! I have so many old magazines!

I love this too, Jude! And of course I want to try this out as well!

Wonder if it would be possible to use plastic bottle caps for the first version, using a glue-gun ... Maybe a smaller container - or loads of caps!

In the late 70:s I once wove a waste paper basket with newspapers in a similar way - I believe I used double brown package cardboard for the bottom and upper lining. But I remember it bothered me that the newspaper turned quite yellow after some time. I guess magazines are a better option for this - and magazines are harder to recycle elsewhere anyway.

What's the black lining at the bottom of the second picture?

Thanks all! Anneli/Bockfilz, the black lining is actually my belt wrapped around the base to help set the glue as I had added another round at the base to secure the uprights and I was doing this with craft glue and glue sticks.
I like the idea of the plastic bottle caps very much as they are everywhere and not so recyclable. I could see that as a little basket for coins or keys or something. I also thought this morning that if you cut up toilet rolls that you could make rounds easily. But as you note they may fade weirdly.

Hey Jude, thanks for answering - clever of you to use the belt for that :-)!

I thought about toilet rolls too, but guess they would have to be covered for better looks and stability - maybe with strips of magazine paper, or alu foil/candy wrapper -

another idea might be to cut up 2-3 cm 'rings' of soft plastic bottles, like for ketchup, shampoo etc -(these might even be stapled instead of glued.)

But as you say, the bottle caps are many enough and hard finding good solutions for ...

OOH, I gotta go get the magazines out of the recycling bin!