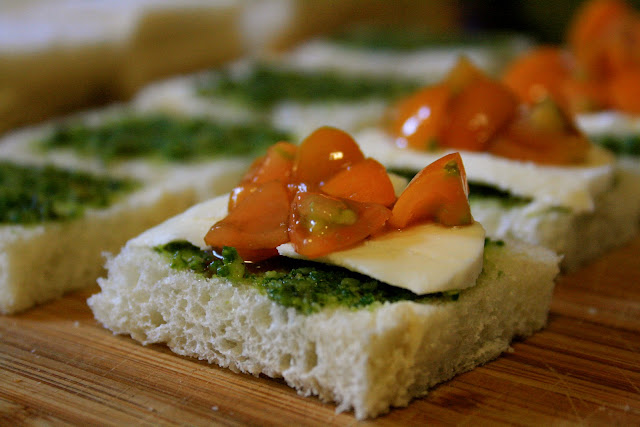 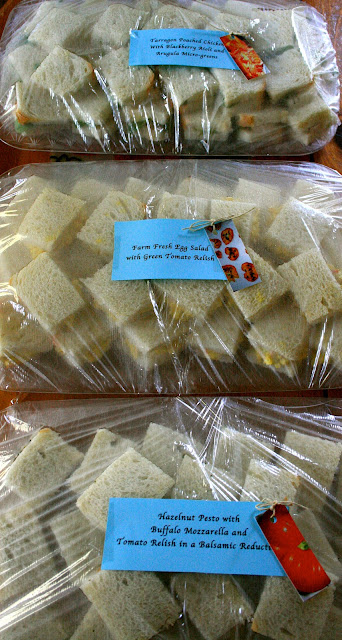 
I'm afraid I was a bit redundant here, as I was so excited today that I decided to post it here and on Tilting At Windmills too :)
~ Amy
Posted by rayfamily at 2:29 AM

that's awesome!! well done, you! how did they like the sandwiches?

i just got home from south dakota and am still pondering much of what i saw...we had lots of local produce - corn, watermelon, zucchini, tomatoes - some from dad's garden, some from other gardens in town - but i don't see a particularly refined sense of food adventure there - for example, i'm not sure my midwestern peeps would go for an egg salad with tomato relish or even for that fancy schmancy caprese stuff (because they would perceive it as such). is your area a bit more refined or do you see a reluctance in people to try things they haven't seen before?

oops, accidentally published that comment as husband, but it's me, julochka!

Hi! This was the message that the hostess sent to me: "The sandwiches were AMAZING and a huge hit! Every single person said that you must go into business doing this! Thank you so much for making the menu unbelievable!!"Kara EEEK! So exciting!

It's a really interesting question about openness to food adventure. I feel like people are pretty open here, sure there are a lot of people who would just as soon have Applebees or processed (boxed) food too, but there seems to be a genuine interest in good and wholesome food. Our town has made huge strides toward revitalization of the downtown, which includes some eclectic restaurants that have done very well. We are actively involved in bringing a co-op grocery to our area as well so have had to do a lot of meeting and greeting recently. So our experience may be focused around enough people who are of similar thought processes that we don't see as much of the other. I will say that our midwestern family always enjoys when we cook and is willing to try new things, I just don't think they seek it out on their own.

That does not sound conceited to me at all it sounds familiar! My husband and I love to cook and find enjoying a restaurant meal a challenge, good luck with your new endeavors.