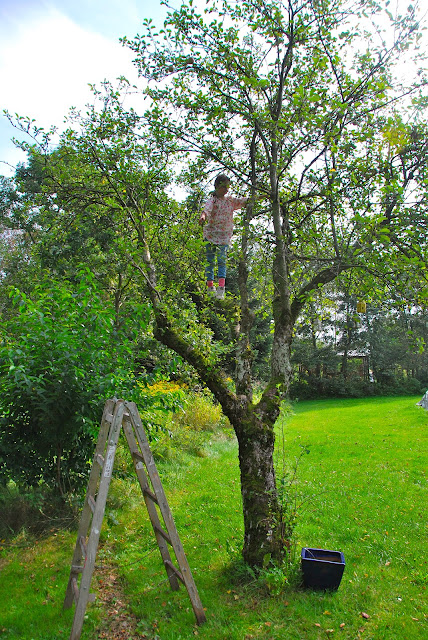 this weekend, we sent the child up the old apple tree in our back yard to get those hard-to-reach apples. it's a very old tree and so the apples weren't as plentiful as we would have liked, but there were enough for a first run of our cider press. 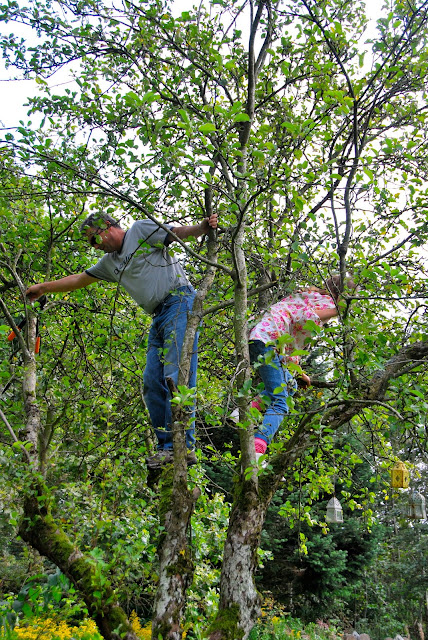 eventually husband went up the tree too and they managed to shake down all of the apples. in all, there were 50-60 some. they are a bit on the small side, but delicious, crisp and juicy. 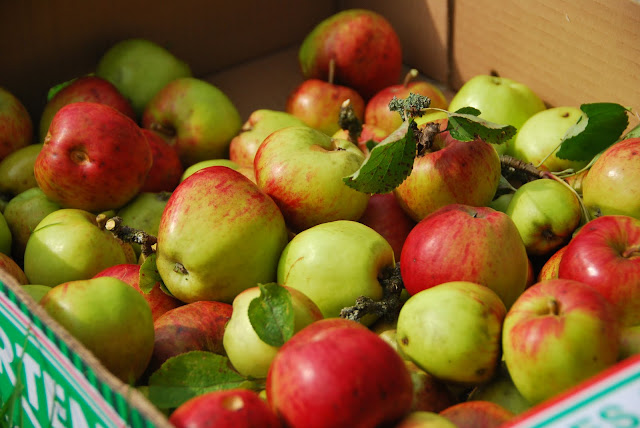 we'll prune back the tree significantly this autumn and hope it encourages better apple growth next year. it's quite a charming little old tree, so we're definitely not cutting it down all together, as it gives atmosphere to the back yard. 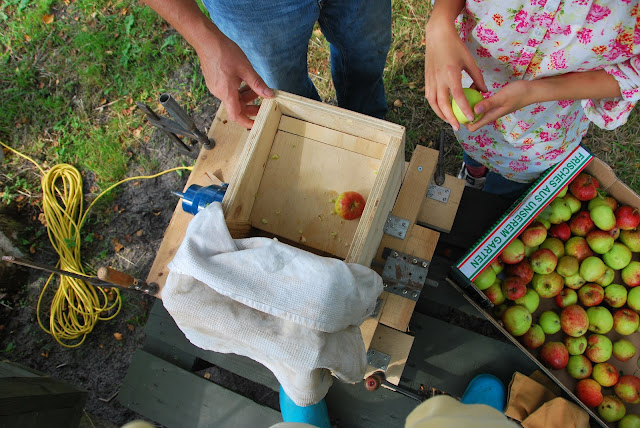 the next step was to send them through the chopper. we learned that the chopper has an awful lot of vibration, so it's a good thing husband sunk those legs of the bench 50cm or more into the ground. 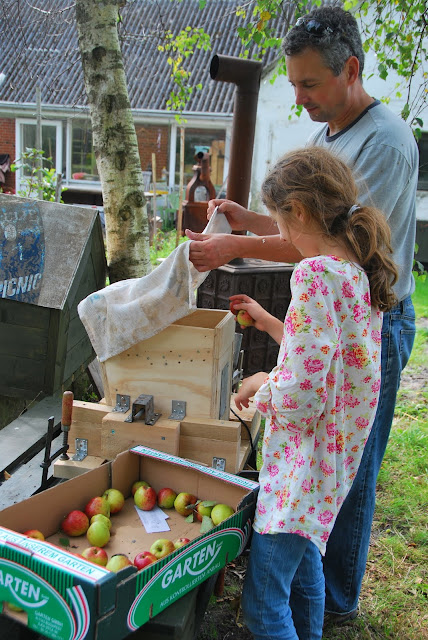 we also realized that the little grinder's engine isn't going to be up to the task of many more apples than we processed. each apple we fed in slowed it down significantly and we had to pause in between to let it get up to speed. it also threw apple chunks around quite a bit (hence the towel over the top of it). 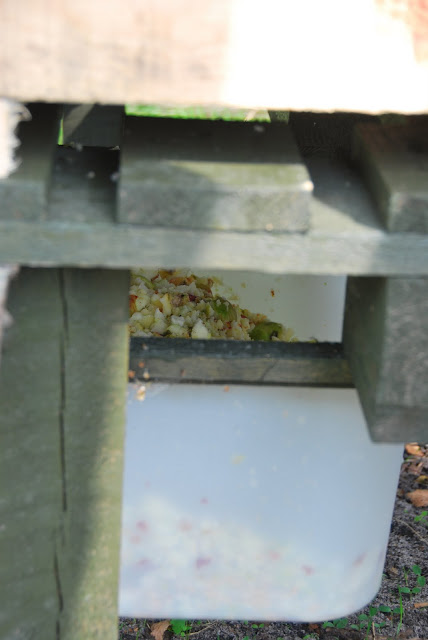 this is a shot of the clean plastic ikea container where most of the chopped apples end up, below the chopper. that worked pretty well. 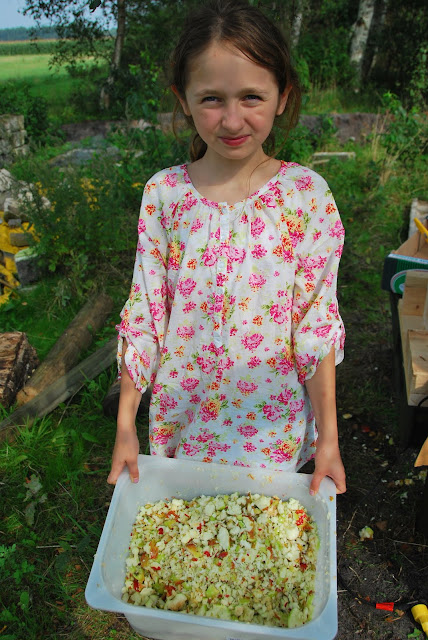 the 50-odd apples resulted in this much chopped. we didn't weigh it, but i suppose it was about 5 kilos. 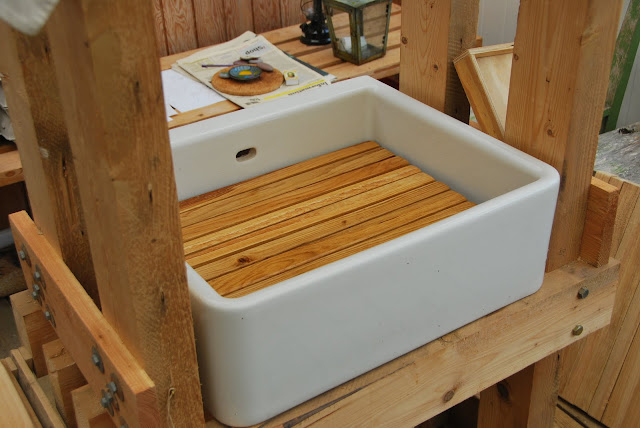 we readied the press. the oak grate in the bottom took quite some rinsing before it stopped giving off an oak-color to the water. we wanted our cider to get its color from the apples, not from the oak! after many rinses, also with boiling water from the kettle, the water ran pretty clear from the oak. 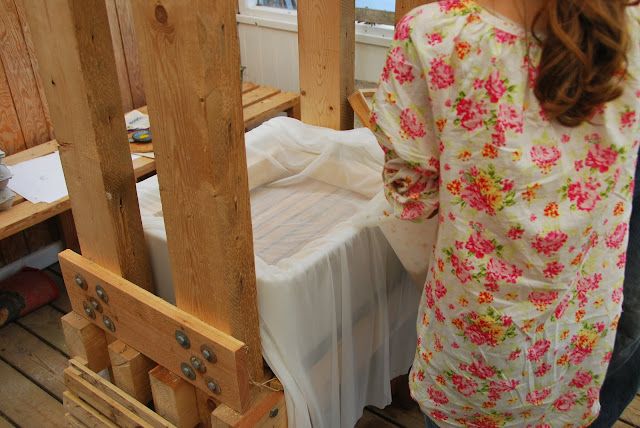 the next step was to make the "cheese." we put in the frame and then laid in a polyester netting cloth (we're going to experiment with different kinds of cloth, but tried this to start with, as it's what many of the sources we've read recommend). the cloth was 150cm wide by about 150cm in length. 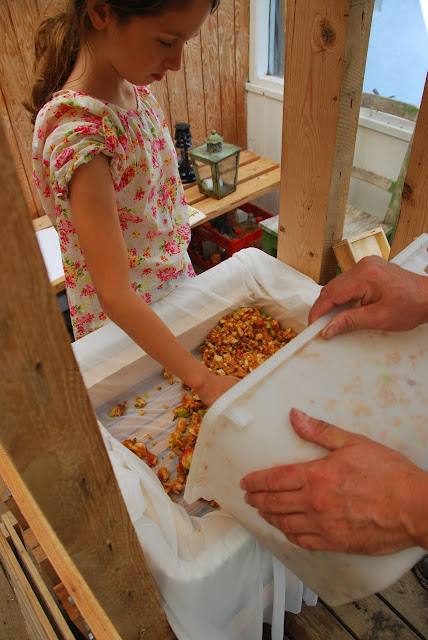 next, we filled it with our chopped apples. the entire bucket of chopped apples fit in one cheese, tho' the press can take more than one at at time. 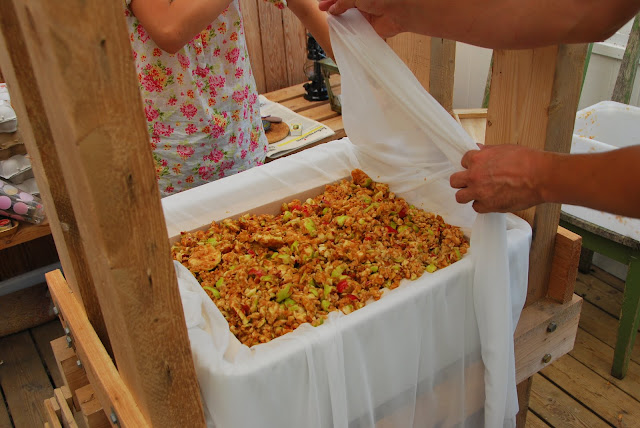 next step is to fold the cloth over the chopped apples. we folded each side over and then the ends, to carefully enclose all of the apples. 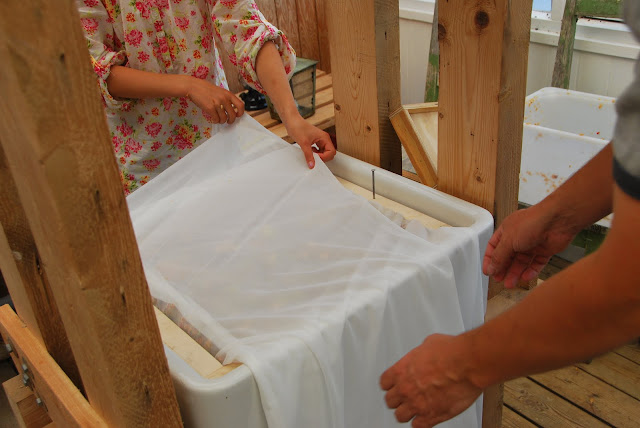 it's a great activity for kids. sabin was so happy to help with it. she actually did a lot of the work. 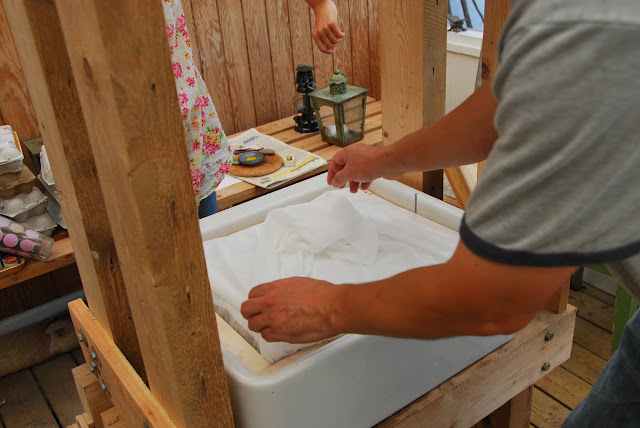 once it was folded carefully, husband lifted out the frame (you can see the little nail "handle" there underneath his right hand. the cheese stood well on its own. 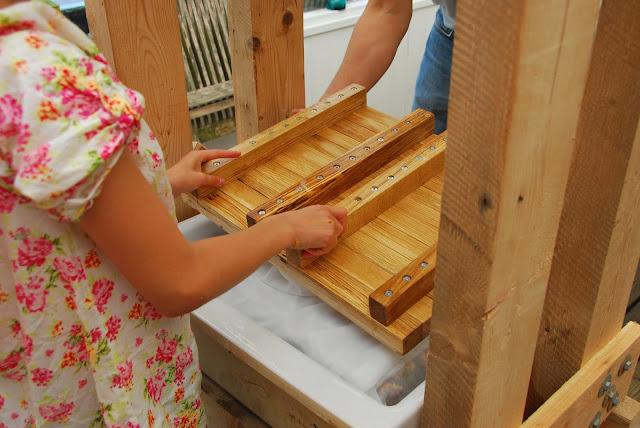 next, we placed an oak grate on top of the cheese and then, since we only had one, three large pieces of 4x4 and then the jack. husband has made a little frame for the jack to stand in, so it doesn't shift out of place during use. 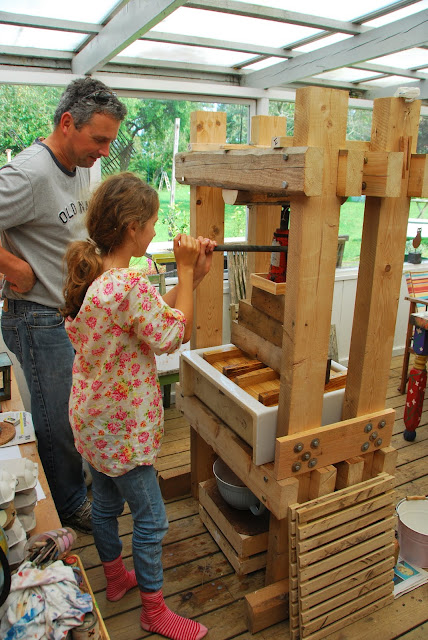 then we began pressing (or rather, we used child labor to do the the pressing), the cider running out into a large bowl underneath the sink's drain. we pressed until sabin couldn't pull the jack handle down again, even by hanging her whole weight on it. 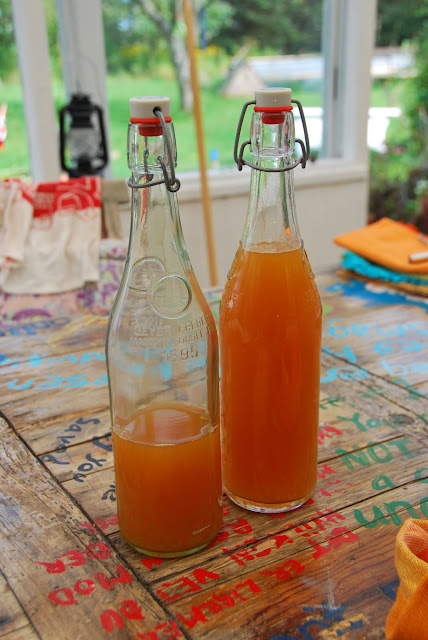 our 5 kilos of apples resulted in approximately one whole liter of cider (these are 750ml bottles). it's sweet and delicious and we're hoarding it a bit until we get our hands on some of the apples promised by a few neighbors. 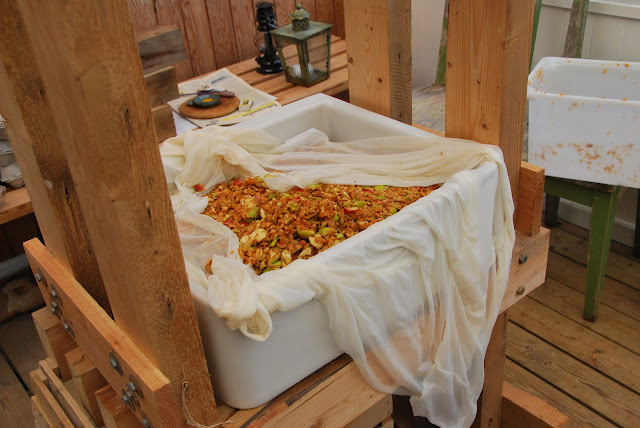 we fed the apple remains to the chickens, but with the next batch, i'm going to make cider vinegar. apparently it's pretty easy - you just take these apple remains, put them in a big crock with some water and let them ferment for a month or so, until the vinegar is the strength you want. sounds pretty easy to me.  i just washed up the cloth and it's ready for the next go.

~ it takes a LOT of apples to make not very much cider.
~ the engine of our chopper isn't powerful enough.
~ the oak is a bit difficult, since it wants to contribute its color to the batch (how do they keep chardonnay golden in oak barrels?)
~ i thought husband's cider press was a bit over-dimensioned, but it needs that strength to withstand the pressure from the jack and stay together. it did this with flying colors.
~ the repurposed sink makes a great receptacle for the juice.

we've managed to pick up 4 beautiful old-fashioned glass wine balloons here and there over the past week or so and we're ready to fill them and make hard cider, as soon as we get some more apples.

if you have any questions about any of this, just ask in the comments!

~ julochka
Posted by julochka at 8:31 AM

Your cider turned out beautifully... thanks for sharing all the details and pictures!

Fantastic! Your press looks great! B has been searching for an old one that we can begin using. I can't wait to head out apple picking. We are going to get a large bucket of apple cider this year at the orchard so we can put up some hard cider too. So fun learning all this new stuff! We just began our primary fermentation on a elderberry/rhubarb wine, I'll post about it soon :)

your cider is beautiful. that color is a true harvest color. Looks like your first run was a lot of fun. Sabin looks so proud.

From what I have read you can make your own pectin with leftover apple bits....that might be another option ;)

I recently pressed my first ever batch of cider, which is brewing now on my counter. I am wondering about your press, do you have building instruction somewhere. I ran the chopped apples through my food processor then pressed and squeezed by hand and by having my daughter stand on a plastic lid over the apples. It worked, but was not ideal by any means. I have four trees on my property and hate to let the apples go to waste.

julia - so envious of your four trees!! we had scrounge apples from neighbors and from apple trees along the road, as the ones we planted this year didn't produce anything yet. :-)

my husband made the cider press himself, but there are commercially-available ones (in a range of prices). i took photos of his process the whole way along, so i'll see if i can get him to put together a tutorial as to how to build it, but it was a rather big job! :-) however, it's really been worth it (what we need is a commercial chopper, as the one he made isn't really up to the task of chopping that many apples - it kept getting hot) - his press is very sturdy (and here i had made fun of all of those big bolts) and can stand up to the pressure it's put under when you're pressing.

i'll try to sit him down to write some instructions. :-)

It’s been a while since my parents and I have done such an activity! It’s good that Sabin knew how to climb a tree while being fearless… same with your husband. If all of you are acrophobic, then y’all probably need some reaching tools (or just your husband’s strength to shake the tree) to do this. Hehe!
~Irma Metaxas