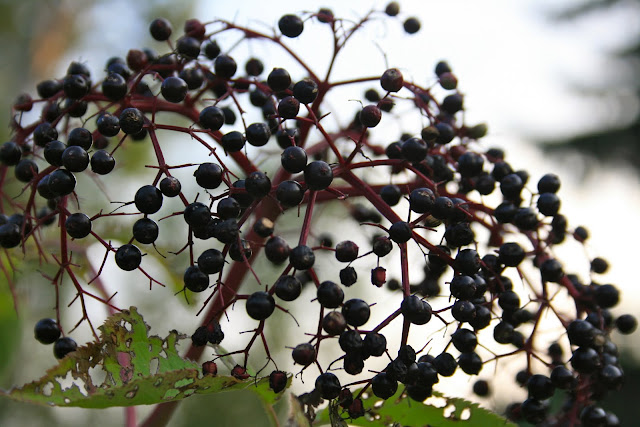 About ten days ago we began a crash course in wine making.  When we planted our berry patch last year, we included elderberries with the intent of doing elderberry wine.  Suddenly, we realized that the elderberries were ready and if we didn’t act fast, the birds would wreak havoc.  We ran down to our local old time feed shop/brew supply and got a quick crash course on starting the fermentation process. 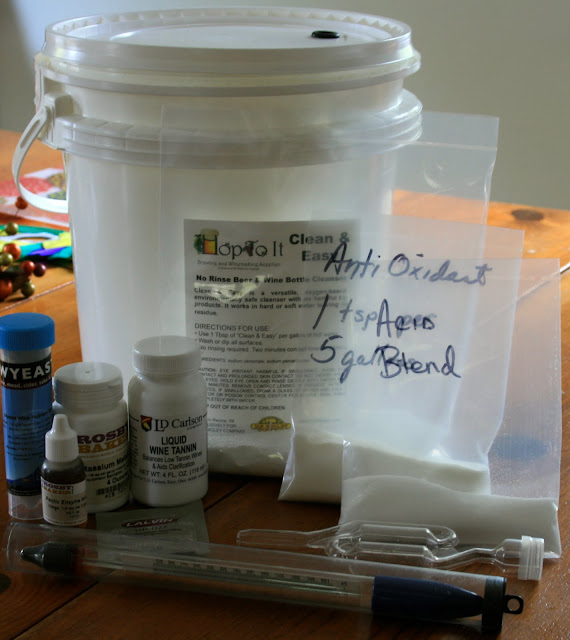 We plowed through the information, bought the different components that we needed and began our primary fermentation.  Last night, we went to strain the fruit, and transfer the already wine like liquid to its secondary fermenting container.  Since we began with only a small amount, approximately 1 gallon, we decided to pour through a funnel, rather than siphon the wine-in-process, once we had strained out the poached fruits.  Everything was going swimmingly, until the darned bowl just would not cooperate, and about half of our first batch ended up down the drain.  So now instead of 5 bottles worth of fermenting juice, we have only two and a half.  Ah well, yet another lesson learned…siphon even small amounts to avoid catastrophe frustration. 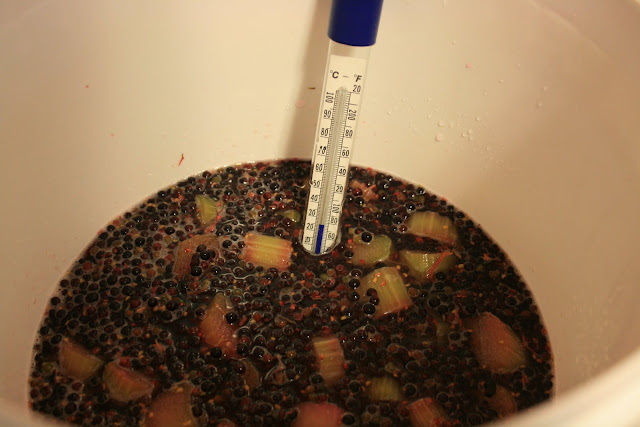 Never fear, we have been collecting loads of the still ripening fruit and will be putting down our second and much larger batch this weekend.  On the bright side, B tasted the batch and was pleasantly surprised by the flavor and complexity already developing!

What have we learned so far??  When dealing with fruits like rhubarb and berries freeze them first, then as they thaw they are already squishier and the juice flows out more freely.  Be sure to kill off the natural pectin’s that are there (they may or may not be of benefit in the finished product and you don’t want to risk the outcome of all your hard work in the end) and then add back a wine grade pectin.  Make sure everything is spotlessly clean using a special detergent.  There are many kinds of yeast, each one works best at a different temperature and will help to provide different alcohol contents, so educate yourself.   Finally, do not let small setbacks frustrate you; it is all a grand, and hopefully tasty, chemistry experiment.  What is next on taps?  More wine adventures, and mead...oh I wish I had some of Julie's honey!
Posted by rayfamily at 8:08 PM

we had a lesson in mead-making last night!! many of these same tools were shown, as well as rather harsh-sounding very chemical-y cleaners for the bottles. we don't have enough honey for making mead yet this year (and honestly, i didn't much like the one he had for us to sample - it was REALLY alcohol-y, tho' i got some ideas on how to improve the taste with more herbs - i'm thinking sage would be interesting - but i digress), so we're confining our fermentation to cider. and just tonight, we were promised a whole load of apples!! yay!

meanwhile, i'd better go check my elderberries..i'm going to make cordial of them. :-) and maybe try some vinegar - that might be really interesting for salads.

I've never ventured into wine making, but love the idea of it. I have a neighbor who has taken some of my damson crop to make wine, so I'm hoping to reap some of the benefits!

Not only is it very delicious, it's brilliant to use in a casserole with venison, or strong-flavoured sausages.

Oh my, this is exciting, I wish you good luck. How wonderful to make your own wine from berries you grew.

This looks different. I found the easiest way to release flavour and colour of the berries was a simple potato masher (the metal one with holes). My wine now looks like an amazingly dark malbec. Of course it is too early to taste, but fingers crossed it works. We are also now drinking the elderflower wine we made, which everyone loves. It looks exactly like white wine but has a brilliant floral finish. Also we did champagne from the flowers earlier which was great, until it began to explode! :D