as you know, we got chickens back in june. and then husband built them a veritable mansion that we dubbed chez poulet, because it's so fancy. the coop has two entrances - one into a totally enclosed area, where we give them table scraps and one into a back yard, where they can fly (and yes, i assure you they can fly, tho' it's not the most elegant sight) over it and get out to explore. 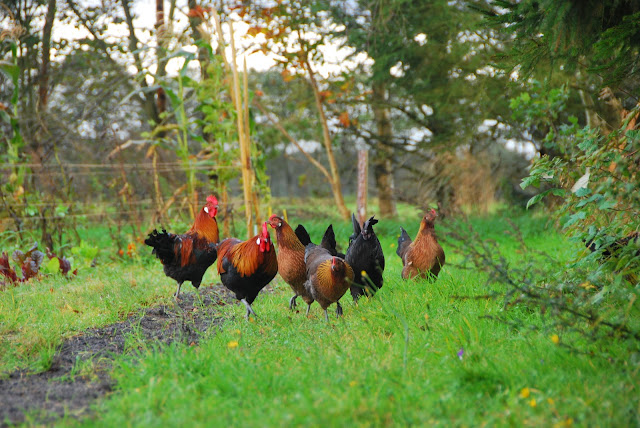 in fact, they were letting themselves out to explore so often, that we've just left the gate open of late, to make it easier for them. it's nice to have them wandering in the garden, cleaning up, tho' i have found them as far afield as over in the shelter belt near our bees. but charmingly enough, they come running from wherever they are when you go out there and talk to them. i hadn't expected that. they're really quite charming. and a bit funny. and their plumage makes a perfect fall fashion statement.

the three roosters can spend hours trying to outdo one another with their cries of cock-a-doodle-doo. and the other day one hen was a rather insistently clucking midwife to another one who was in the nest and clearly laying an egg. it was as if she were a little chicken cheerleader. later, i realized it may have been more of a complaint, because i found that hen in the same box, laying an egg of her own, so she was probably just telling that other hen to hurry up. there are five nest boxes, but as they've begun to lay eggs, i've noticed that they stick to the first one and the fourth one. it's hard to know what chickens are thinking, so i'm not sure why that is. 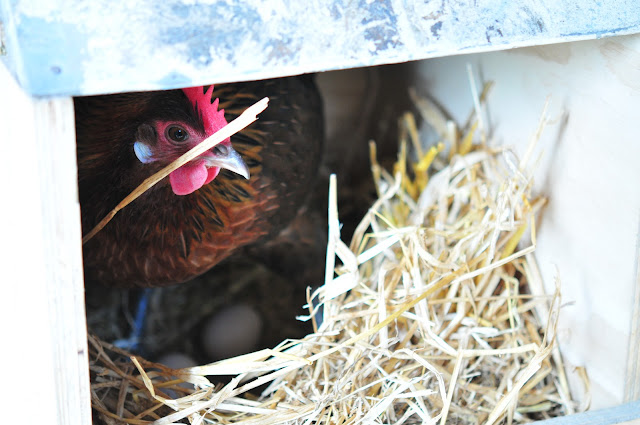 we're getting 2-3 eggs a day and they're starting to be a little bit larger now (they were pretty tiny at first). i've already checked an all-eggs cookbook out of the library, as once all 9 hens start laying, we're going to be eating a whole lot of eggs around here! at the moment, we can keep up.

in all, i'm enjoying this chicken thing much more than i thought i would. they're easy to have around. plus, we've cut back significantly on the amount of garbage that goes into our bin on a weekly basis, because so many scraps go to them - the only thing we don't give them is chicken, but otherwise, all greens, leftover rice or couscous, cheese, other kinds of meat go to them, anything we didn't manage to eat all of ourselves. in return, we get plenty of eggs and quite a lot of amusement.
Posted by julochka at 8:41 AM

If at one point you get too many eggs you can also sell them in your own little shop beside the road!!!!

They are so much fun! I don't know if you guys eat much shrimp....but the shells are like chicken crack!! I love the magazine layout :)